On That Latin Kick

Today, I’d like to share with you my delicious new recipe of Blackened Cocoa Fish Tacos, which has a fantastic mix of coffee & cocoa powder. Coffee infused with cocoa is also a great alternative to coffee + cocoa powder. After my nearly month old post on South American inspired recipes, I’ve found myself on a bit of Latin kick. While I haven’t explored much of Boston’s offerings–honestly I’ve been told that there’s not much to explore anyway, I mean we don’t even have Valentina or Tajin, you guys; the struggle is real–I love making my own Latin dishes whether it’s tacos, nachos, enchiladas, or mole. Seeeee, I don’t only eat sushi & various Asian food, gosh.

Lacey, one of my best friends who’s currently studying abroad in Sydney, took note of my absence on TB the other day. She knows I loathe Facebook, so I don’t update it, which means she doesn’t get updated on what I’m doing with my life unless it’s on my Instagram or I text her. Well Lacey & other curious/noisy people, I’m updating, so I hope you can handle it. You ready?? I’m ready.

Last month, my former roommate Gaby visited me in Boston. She had never been before & wanted to eat ALL THE THINGS. Not only did Gaby & I share a bedroom back at our days at UCLA, we also share very similar backgrounds. Both our fathers are physicians, our parents are immigrants, our cultures value family & good food, & obviously, we both grew up in Southern California. Aside from all that, Gaby is a delight to dine & travel around the city with. She’s up for anything & eats it all, raw, cooked, fermented, whatever! She has a much stronger aversion to fennel than I do, which makes pho–a very popular Vietnamese noodle soup–on her list of, “I wish I could like it, but it has fennel [seeds].” So while she was here, we avoided Vietnamese food because no one (besides Vietnam) does Vietnamese food like SoCal anyway & went for New England’s finest: clam chowder, lobster rolls, & oysters. Gaby didn’t get to try my tacos, she did get a bowl of my Bun Rieu, a delicious Vietnamese tomato & crab noodle soup that happens to both be our favorites. It’s my specialty Vietnamese soup & her favorite thing I make. I hear she’s paying me in a surprise package of Valentina & Tajin, so I’m really excited. La vida es mejor picante!! Una vida sin picante es una vida muy triste. Muchas gracias, Gaby. 🙂 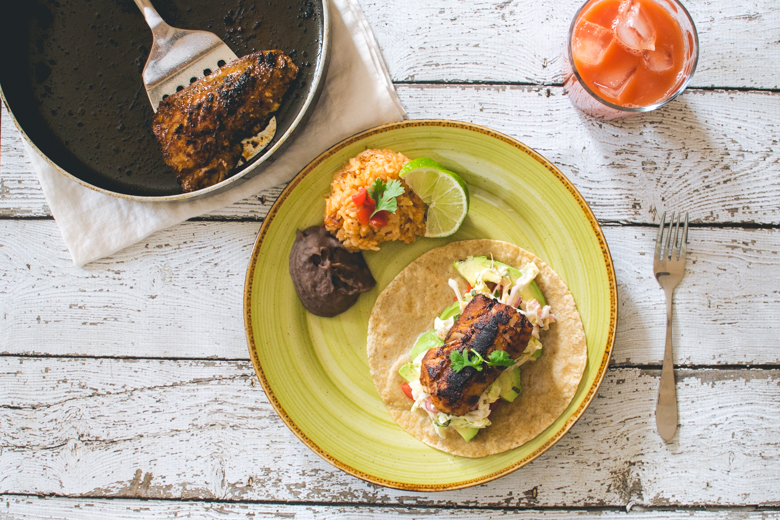 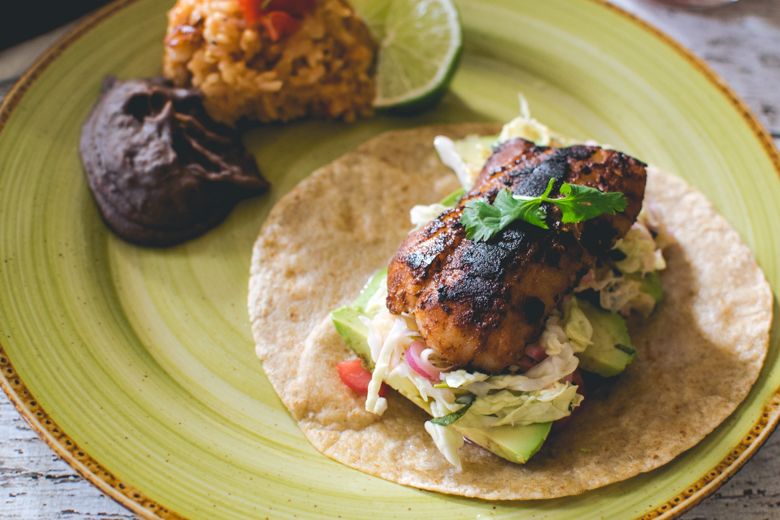 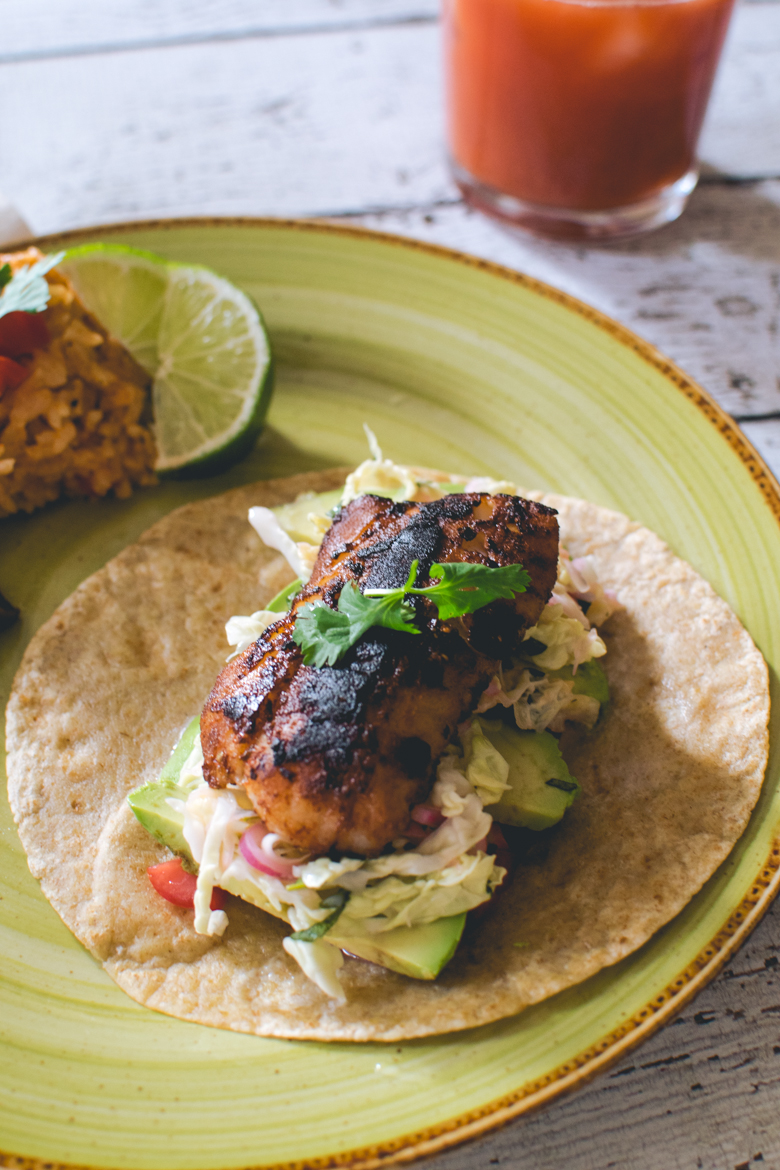 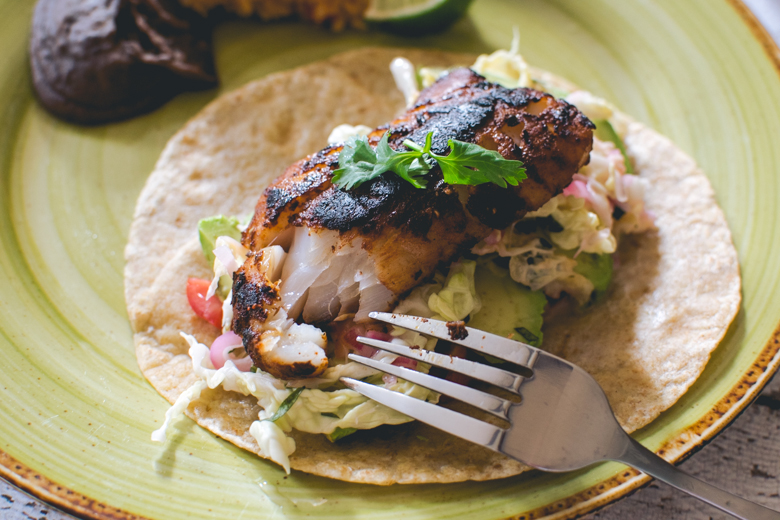 Even though I’ve been a pescetarian for about 4.5 years, I’ve only been asked what my favorite fish is once. No one really cares I suppose. 🙁 So, like an annoying oversharer, I’ll tell you: the answer is Sea Bass, but I rarely order it since it’s endangered & overfished. Tied with salmon, my second favorite is sablefish or more popularly known as black cod. I could only find Atlantic cod in my local Trader Joe’s so that’s the fish I used in my recipe, but it is also, overfished & vulnerable. However, if you can get black cod, I’d recommend it. Cod varieties (not Atlantic) are great alternatives to Sea Bass as they’re abundant, flaky, & so buttery. It was also first time I made cabbage slaw & it was so tasty. A great combo of tangy & salty!

I recently splurged & bought myself a Le Creuset Dutch Oven in Caribbean (teal, obvi; it’s my obsession) at a heavily discounted rate so you can count on a refried bean or baked beans recipe soon. If you’ve been thinking about getting a Dutch oven, just do it. Le Creuset has a lifetime warranty & it makes your cooking & cleaning experience so much better. So many new recipe opportunities. MUCH HAPPINESS. 😀

Gaby Visits Boston, We Eat Everything

She was here from April 2nd until April 5th, so there are lots of photos, but I’m only selecting some to be featured in the post. Remember to click through the links at the bottom for more photos.

Gaby poses with her new pet before we walk into MFA.

This museum is gorgeous.

It’s rain! Something Gaby is no longer familiar with due to California’s ongoing drought.

The details in this sculpture are amazing.

Luckily for us, the Hokusai exhibit was on display. His work is truly beautiful, but I did stupidly think the photo would be bigger.

For those of you unfamiliar with Katsushika Hokusai, he was a very important Japanese painter & printer.

Other than his famous painting of waves, he also painted beautiful photos of flowers.

His process of painting & printing this were tedious, to say the least. He first drew the outline of the wave, went to a skilled craftsman to etch it out into wood, & then began his work.

I thought they were cute.

It’s not a museum without some Mondrian!

This was an equally emotional & beautiful gallery.

These photographs were naturally damaged by the tsunami.

After spending a good amount of time in the MFA, we went to Oishii to have a delicious Kaiseki lunch.

This was Kaiseki Lunch Set D. Kaiseki is a traditional Japanese multi-course meal, using seasonal ingredients. Some ingredients are obviously more seasonal than others in this one though.

Can’t wait to devour it all!

Wrapped in cucumber instead of nori, this handroll was refreshing & flavorful.

This crab cake was tiny & I didn’t want it to end.

This dish was such a nice fusion between Japanese flavors, New England, & Italian. It was a delicious dish.

This was the first time in a really long time that I had tuna. I still actively try to avoid it as much as possible, but hamachi is always a welcome delight.

So many dishes that my frame can’t even compensate for them all!

We shared this roll in addition to our incredibly filling lunch because we wanted to experience another item from their extensive menu. Did not disappoint. It was amazing.

Gaby really wanted to try some good clam chowder, so I did some research on where Bostonians boast is the best. We arrived at Atlantic Fish Co.

After a hearty meal with my current roommate, Cassy & my former roommate, Gaby, we wandered into BPL for a used book sale.

L-R: Cassy, Gaby, & Me. Fun fact: they share the same last name. Guess I have a thing for roommates with their surname!

On Gaby’s last day in Boston, we went to Brunch at Island Creek Oyster.

The extensive bar in the back, large open space, & nicely decorated restaurant was beautiful to stare at.

Because it’s not brunch without a Bloody Mary. Also, I’m like an old woman from the 50s so yeah.

We had 6 different oysters all from NE.

They were all so unique & delicious, but our favorite was the Island Creek.

So these were kind of like arancini, but also kind of not. They were really good.

Gaby & I split a lobster roll & were pleased with our meal.

She was pretty happy with her meal.

Picco has some of the best pizza in Boston & I didn’t want Gaby to go home without having a little slice of heaven. We ate this after we went shopping at DavidsTea for her mom. I also bought lots of tea…that is now all gone. Whoops.

Gaby poses in the South End before she’s off to the airport. Anxiously awaiting some Valentina, Tajin, & our reunion one day!

Played catchup on all the photos I never got around to since…Christmas. So, check them out because I spent HOURS editing & posting these guys up.